This spring, a plethora of hosta had overtaken my flowerbeds. I did a bit of reading about how to care for hosta and learned that they should be dug up and divided every three to five years. I was pushing the six-year mark with mine.

As I dug up dozens upon dozens of plants and carefully separated them by their individual root stems, I began to consider how cultivating hosta is like leadership. 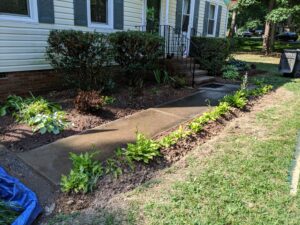 Hosta have a seemingly unlimited selection of colors, heights and textures. There’s a variety to fit nearly any situation. That’s part of what is so appealing about having them in any garden or planter. As we think about what makes a true leader successful, one key trait is that we encourage and cultivate diversity among the workforce.

Just like hosta varietals, the list of different characteristics and traits is endless. The key is to place each in a climate that best suits their preferred method of growth.

Hosta tend to prefer moist, rich soil. They are drought tolerant, but you can’t let them dry out too much. Well, duh! What doesn’t grow well with the proper care and feeding? However, because hosta are so tolerant, it can often be difficult to see distress until it’s too late and they’ve experienced “crown rot.”

So too can this happen with our people. The good ones are tolerant. They often give subtle signs of distress, but typically aren’t bent toward blow-ups or drama, so their distress goes unnoticed until it’s too late. As leaders, we must work hard to notice subtle signs of slowing growth and be sure to fertilize and water regularly. That’s why regular communication and a standing meeting cadence that includes stimulating content is critical for team growth.

Hosta can grow well in shady locations, but a rule of thumb for the placement and care of hosta is the lighter the foliage, the more the need for sun. So, in addition to moist, rich soil, hosta also needs occasional sunlight for optimal growth.

The same holds true for growing people. Even those who shy away from recognition and the limelight need occasional “sunlight” — aka, recognition. These people may not wish to be given an onstage award, but a handwritten, meaningful thank you goes a long way. As leaders, we must consider the variety of personalities of our team members and direct sunlight on them according to their needs.

Hosta plants are relatively disease free, but they do have predators. Deer find them tasty and slugs can leave unsightly holes in the leaves. There are remedies for both scenarios, including planting daffodils around hosta to prevent deer, and scattering sand around them to keep slugs away.

As leaders in our organizations, we too need to ensure we are doing the right things to keep predators away. Ensure that people understand the role they play in the overall mission of the organization. Ensure that benefits and perks are meaningful, and that rewards and recognition have impact. This will go a long way to minimizing the effect of predators.

Hosta flourish when you dig up and divide plants every three to five years, as they are putting out new growth. This reminds me of the responsibility we have as leaders to grow future leaders. As we spot new growth, we should encourage and facilitate “transplanting” whether that’s in our own garden or to a new plot of ground.

People, like hosta, will thrive when they receive the right care from their leaders.